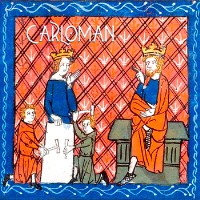 Occasionally it’s good to branch out and listen to different types of music. My little branching out came in the form of Carloman. They describe their sound as pre-Baroque, medieval folk music. Indeed, when you listen to the record, you could feel as if you’re gracing King Arthur’s court or simply trapped somewhere in the 19th century with kings and queens.

Even if you aren’t really into their sound, there’ no denying that the guys have something different to offer and it’s worth checking out. Greeting you as the opening track in the record is Song for the Sacrosanct (Part I & II.) The track is a slightly upbeat one that combines old school instruments, solid vocals and a jolly beat.

The third track, Oh My, is my personal favorite. It’s a quiet and slow folk-like medieval love song that features electronic bits along with solid percussion and great melodic vocals. Other wonderful songs include Brine of Capricorn, Those Who Lead and March of the Beasts. This is definitely an album that’s unique from your usual run-in-the-mill folk records.

If you’re feeling adventurous, go ahead and take a listen. It’s a bit tough to understand at first but eventually you’ll see how their sound all actually works together.