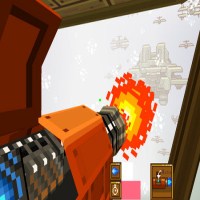 Another entry into what’s now become a mecca of indie gaming goodness: Stratus is one of the hundreds of entries to the Ludum Dare game competition. Created by Richard Edwards, the game features interesting pixel style artwork and a pretty cool gameplay.

For the uninitiated, Ludum Dare Competition has been around for years now. It’s an event where independent gamers create an entire game in as little as 48 hours. Each game revolves around a certain theme that’s announced before the start of the competition.

For this one, more than 500+ entries have already been submitted, among them this cool puzzler from Edwards.

In Stratus, you play an unknown protagonist that wakes up in the middle of a pool of blood. Stuck in a ship with no crew, you need to explore your surroundings and piece together your memories about what has just happened. There are various items scattered all over. You’ll need to figure out what these items are for and how they can help you.

Despite the typical backstory, it is a pretty entertaining game worth your time. Graphics look great. It’s interesting to watch the artwork, bringing back to mind some of the coolest Low Res games of yesteryears. The game is a bit short but I guess for the 48 hours the developer had, it’s definitely worth the try.

Hopefully once the competition ends, the developer will expand and turn this into a longer, more full-pledged game. Hop on over to the site and give this a download.