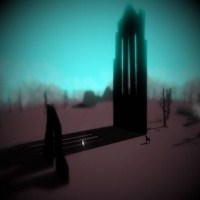 One of the more interesting games of late, Ruins, is a beautiful puzzle platformer involving dogs, rabbits and gorgeous shadowy landscapes. The game was created by Cardboard Computers, the same people responsible for that equally intriguing point & click about repairing balloons, Balloon Diaspora.

They’ve been around for some time and have released quite a handful of titles under their name. Specializing in short art games, the company is well-known for its beautiful graphics and quirky themes. Ruins is no exception to this. With a stunning game setting and an unconventional gameplay, it’s definitely worth your time.

Now a word of warning, the game deals more with ideas, and oftentimes you’ll simply find yourself discussing or thinking. There’s no big boss fight or exciting surprises in the game, instead you’ll be playing a dog who chases rabbits. And once you finally catch up to them, you actually just talk and listen to what they have to say.

This may sound utterly boring but it’s surprisingly entertaining. The dialogue or conversations that take place are very engaging and how you respond in the conversations serve as a crucial point in the game. It’s essentially what ties the whole storyline together.

Capturing the whole story by playing the game just once though is impossible. It takes multiple plays before you can get the entire picture since certain options/answers will yield only one piece of the puzzle. However, that’s the beauty of it. It’s the race of finding out the real score that will make you want to play the game again and again. Plus, the stunning landscape and the dreamy musical score is also another reason why you might want to keep coming back to this.

Overall, if you want to try something new and just play a very unconventional game, then you’re in for a treat in Ruins. Give this a go. The game is available as a free download.