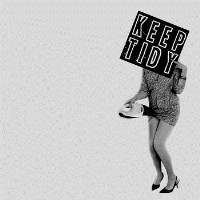 Keep Tidy is a Vancouver band that will satisfy your craving for hardcore, balls-on rock. With female-led vocals, the band reminds me of a cross between The Distillers and a very loud and uninhibited, Yeah Yeah Yeahs.

They are made up of Brett, Dustin, Kyle and Shmoo; most of the members aren’t new in the scene. They actually belonged to various other bands in the local Vancouver rock scene before coming together to create this fast paced, loud record that seems to be made up of nothing but a whirlwind of sound.

The band comes in strong and hard. Blasting through with 7 songs that equal to 8 minutes of play time only. That might seem quite short -okay, that is very short – but it doesn’t diminish the energy or likability factor of the songs.

Starting with Goochie Main, the song declares its presence with loud drumming, followed by prominent bass work. Within seconds, you’re greeted with the brash female vocals that perfectly harmonize with its surrounding instruments. At 1:54, this is actually the longest song on the EP. It’s followed by an equally commanding track, Simpsons Quotes. Each song seamlessly flows into another that it’s sometimes hard to know where one ends and the other begins.

In spite of this, they never fail to inject that headstrong sound, which makes you want to jump around and head bang. If you’re in for some rockin’ good time, then you should take a listen to Keep Tidy. Definitely a band worth checking out.