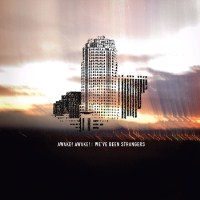 Even though this debut record from the band is a few years old, it’s fast paced indie pop rock goodness certainly makes We’ve Been Strangers a download not to be missed. Made up of David Johnson on lead vocals, Andrew Goodwin on guitar, Taylor Powell on drums, and Chad Turner on bass; Awake! Awake! hails from Murfreesboro, TN.

Inspired by bands like Jimmy Eat World, Switchfoot, MuteMath and classic artists like U2 and The Police, their sound is certainly a nice compilation of feel-good indie rock and melodic power pop.

We’ve Been Strangers was recorded independently “inside a bonus room from a college home.” Despite this DIY process, the record comes out with a clean and polished feel.

Starting with the two minute opener, The Dawn, you get a warm and moody welcome to the album. The song flourishes with melodic guitars that ebb and swell like a morning tide. It’s a nice opener although a bit misleading since you’re in for an indie pop rock fest in the next few tracks.

Daylight and Ocean are both examples of infectious indie rock music from this band. They’re the type of songs you can play and enjoy without much thought. By the fourth track, Quickly I Take My Time, Awake! Awake! exude a more Jars of Clay vibe. Although they don’t point out that they are a Christian band; the song is nevertheless a beautiful and uplifting cut. They perfectly cap things off with a closet demo done in acoustic titled, All I Hold.

One of the best things about this album is that even though you can say their sound is “typical indie rock” they do add a certain touch. From pop rock to a slightly more electro-ambient sound, Awake! Awake! covers their bases well and create music that’s thoroughly enjoyable without much coaxing. Take a listen and grab the download.