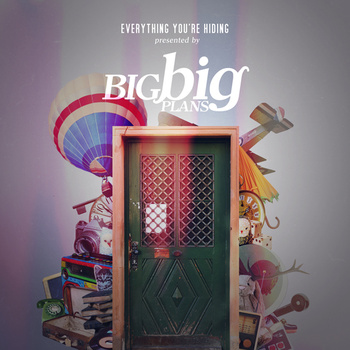 Big Big Plans‘ debut album, Everything You’re Hiding, reveals all the secrets and fears lurking in our closets.

Overture kicks with a slow but edgy arrangement of electric guitars and heavy drum beats. Wumbology: The Study of Wumbo follows with a more rapid approach. Though the track takes on a louder and rock aesthetic, Reavey’s vocals are never drowned out.

Stars Shoot, But Don’t Kill speak to those who are in the process of mending and moving on. Stop & Go and This Doesn’t Point North also traverses on a love that’s ready to crumble down. These tracks share much in the way of mood, theme and texture giving the album a consistent sonic foundation.

Closing track, Julia, surprises the listener with its toned-down intro slowly building to a plethora of clean vocals, heart-piercing lyrics and full-drum treatment. I love how the title gives a name to the face that’s been the subject of the songs in the set.

Everything You’re Hiding sounds like its ready to hit the radio waves. Big Big Plans have mastered the art of punk-rock music that will surely keep the kids dancing.