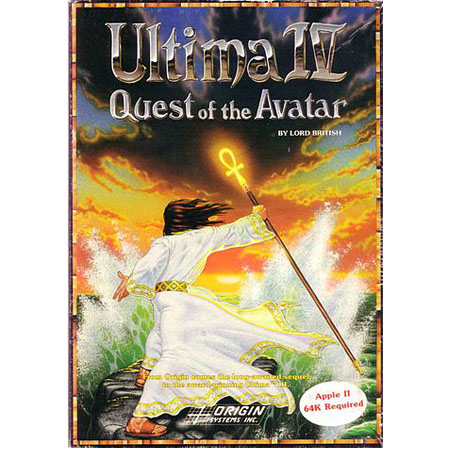 Ultima 4 is the fourth in the Ultima RPG franchisee. It won numerous applauds for its shift in gameplay compared to the existing Ultima series and with a much better, concrete story-line. Initially released in 1985 for the Apple II, the developers worked and made the game available on more than 12 platforms as the time went by.

Developed and published by Origin Systems, the game was ranked at No.2 by Computer Gaming World in 1996 on their ‘Best Games of all time’ list. Even the game’s designer, Richard Garriott considers this to be his personal favorite.

Ultima IV picks up from where the previous three Ultima titles left. Players are put in the city of Britannia, which is under the rule of the British. Instead of going out to finish an evil force, players are required to focus on the development of a more virtuous life and become more of a spiritual leader, setting an example for the people of Britannia.

The game follows the protagonist’s struggle to understand and practice the Eight Virtues, that is, 1. Honesty, 2. Compassion, 3. Valor, 4. Justice, 5. Honor, 6. Sacrifice, 7. Spirituality and 8. Humility. Once the eight virtues are understood well by the character, collecting all the needed artifacts and entering the dungeon called Stygian Abyss, the player gains access to the Codex of Ultimate Wisdom, thus becoming an Avatar.

Moreover, players also have the option to interact with non-playing characters from time-to-time. Unlike previous versions, where the NPCs just gave a one-lined canned answer, in Ultima IV the interaction not only is vast, but players can also choose the topic of conversation for appropriate and accurate answers.

Overall, the Ultima IV is a great game and will hook players to their PCs for a long time with the varied gameplay and missions available. There are various versions available for specific platforms, so make sure you are downloading the correct file.