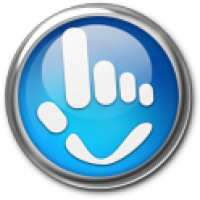 Here we have another great utility offering for all Android users and this one is called TouchPal Keyboard. Very much like the “Swype” input, this digital solution also aims at dethroning the conventional on-screen QWERTY touch keyboard.

Developed by CooTek, the company has been constantly at work when it comes to coming up with newer and better Swipe technology keyboards for the Android. To date, the TouchPal Keyboard app has won the Global Champion of GSMA Mobile Innovation Award, a great reason to try-it out.

Swipe on-screen keyboards aim at making life easier for people with touchscreen devices. In many cases, shooting long emails or texts on a touchscreen QWERTY can be very annoying, keeping aside the many mistakes that accompany it. TouchPal keyboard requires users to just swipe their fingers from letter to letter and Volia! you’ve got it.

These keyboards are not full proof though, so while using its competitor products I did notice quite a lag inputting long words and the margin in error was huge. This is where TouchPal scores with its Curve feature. With Curve, users will witness a lesser error rate while inputing longer words. So, suppose you want to type in the word Advancement, now instead of swiping from A to T, the user can just swipe A,D,V and on A give a long press, Voila! the matching words containing ADVA in the beginning are thrown-up. It is as easy as 1-2-3.

The app also sports a next-word prediction input that is said to save upto 80% keystrokes required on the conventional QWERTY keyboard.
TouchPal is a multi-lingual app which supports quite an impressive number of languages, some as in-built and others that need to be downloaded as TouchPal language packs. It also supports voice-input on Android 2.2 and higher devices, though it should not be given much heed.

TouchPal has a number of competitors and the one that comes closest is SlideIT keyboard, but it is a paid app. Overall, TouchPal is very neat, and unlike its competitors it has a lot to offer with great features and functionality. At the present moment, the developers are offering the Spanish language pack, Chinese PinYin pack, and the Handwriting pack for free.