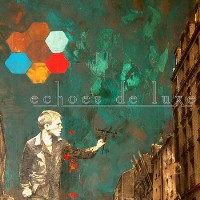 This self-titled debut EP from Echoes de Luxe is filled with good surprises. It might be short, with only 5 tracks, but it beautifully showcases the band’s range and musical style.

The EP was released last 2009 and included a stellar mixer and producer in the person of Alex Newport and Pete Lyman, respectively. These two have worked with bands such as Jubilee, Mars Volta and Death Cab for Cutie.

To top it off, the boys managed to secure airplay and performed live for Dave Navarro’s radio show. Seems like a pretty good start for any band, right?

Made up of Brahm Bourque, Richard Swan, and Spencer Wynn, the band has been winning praises and great reviews for their sound. In their young career, they’ve  managed to share the stage with acts like Diamondsnake, Big Black Delta, Morning After Girls, and Audible Mainframe to name a few.

Kickstarting the EP is a heavy and slightly new wave track, Moving Cars. It’s a catchy number that’s filled with jangly guitars and British singing. It’s followed by the energy-charged single titled, The Price of Love. The cut comes with heavier drums and great guitar riffs. After two uptempo cuts, the band takes it to another direction and provides listeners with a more melodic rock. Meanwhile, Astronaut and Alchemy are both quiet songs that feature the band in a stripped down and raw setting.

For a debut EP, the compilation is a great find. Listeners will get a hint of new wave, indie rock and even mellow alternative cuts to satisfy their fancy. Great recording quality and great cuts mark this record. Best part is that it’s all available for free. Go ahead and take a listen.