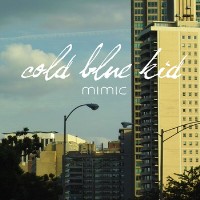 Six-piece group, Cold Blue Kid is back with a whole new release. Mimic delivers 6 tracks bobbing between indie folk to alternative. Occasionally, they create a cloud of shoegaze over their tracks which makes for an interesting and unconventional indie pop sound.

The Chicago crew is made up of Alex Longoria, Evan Holmes, Andrew Sole, Sarah Gallagher, Aaron Apter, and Bryna. The group have been playing shows in the Chicago area since January 2011 and so far they’ve released two compilations apart from this, Cold Blue Kid Demo and 05.06.12 @Subterranean.

Mimic is a masterfully crafted record filled with a wave of indie shoegaze rock and punctuated with hazy 80s synth. Kickstarting the party is noisy, rhythm feat, Heart of Steel. The song takes a bit of getting used to and at certain instances you might find yourself groping for the remote and attempting to tweak the equalizer settings on your player. That’s not necessarily a bad thing though since it’s what makes the song standout. It forces you to listen with your undivided attention if you want to understand all the lyrics as well as instruments embedded in it.

Setback, takes you on a quieter stroll; offering trippy, chain-smoking Nico-esque vocals throughout the piece. By the end of it, you would have lost yourself in the moody atmosphere. It’s a song to keep on the background if you’re staring blankly into space in deep thought or if you’re brooding over a bad heartbreak.

Following it closely, as if snapping you back into reality is title-track, Mimic. With punchy drums and sweeping guitars, you’re back into new wave indie rock territory. At instances it sounds like an 80s pop rock song, only much cooler than what the decade generally offered.

Cold Blue Kid delivers something new and out of the ordinary for indie pop lovers out there. It’s a record that grows on you; forcing you to take a few steps back in hesitation at first listen, yet eventually wooing you in like a long lost lover holding their arms wide open. Step forward and embrace it fully. It’s absolutely free for download anyways.