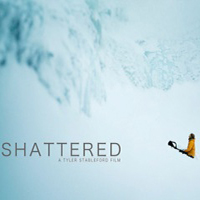 Experience a young man’s dream and nightmare in Shattered, a short film by renowned Aspen-based photographer and cinematographer Tyler Stableford.

After summiting the impossible, an elite climber finds himself empty. Shattered and alone, he searches a fulfillment higher than a mountain peak. This five-minuter film has already garnered international recognition including an official selection for 5 Point Film Festival, New Zealand Mountain Film Festival, and Mountain Film in Telluride, among others.

Deeply affected by Steve House’s award-winning book Beyond The Mountain, this dream project explores the mind of the award-winning writer and high-altitude alpinist.

Steve House carries the film on his shoulders performing heroic mountain scenes as he narrates, write, and acts on the film. The short is like a visual poem with Steve’s voice propelling the journey.

The scenes were shot in death-defying styles—no video rigs or monitors, dollies, or cranes. The low-fi filmmaking perfectly matches Steve’s bold and spare attitude on climbing. The resulting shots were crisp, clean, and stunning. They transcend the ideas of a long journey nearing its end, and how the climber plummets into fear and elation to the greater unknown.

Through its five-minute run time, Shattered is a beautiful yet sorrowful film that manages to offer nuggets of inspirations and realizations. So download, press play, and watch this one-of-a-kind masterpiece.