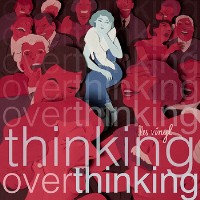 Les Vinyl is a band you turn to for some fun alternative indie rock. Hailing from Staten Island, New York; the group likes to keep things simple with a traditional band setup.

The quartet delivers a sound that’s every part familiar indie rock yet with beautiful catchy hooks and a quirky touch. It’s this mixture of simplicity and eccentricity that makes the band a worthy act to watch out for.

ThinkingOverThinking  is their latest effort and features music that’s reminiscent of early Weezer (including the cheeky lyrics.)

If you’re wondering where all the quirky wordplay comes from when you listen to the band, you’ve got guitarist Casey Jost to thank for that. A writer for Late Night with Jimmy Fallon, he collaborates with rhythm guitarist and backup vocalist, Jenny Miller; Pat Given on drums and bassist Mike Carlo to create feel-good indie rock you’ll want to listen to.

From opening single, Overboard, you’re greeted by an indie rock gem with a catchy rhythm and coupled with slightly shouty vocals. The band effortlessly goes mellow indie pop in title track, Thinking Over Thinking to slightly louder musical performances in Too Right.  All this while sneaking in brilliantly penned lyrics like in the single, Sidekick.

Despite being new to the scene, they’ve had a chance to share the stage with a good number of bands, playing alongside hard core rock acts to soft indie folk pop musicians like  Ingrid Michaelson.

Overall, Les Vinyl is an extremely likable band whose music you can enjoy whether you like indie pop rock or not. Thanks to their refreshing cuts and oozing charm, they easily appeal to a wide audience without even breaking a sweat. Take a listen and support the band by grabbing the download.