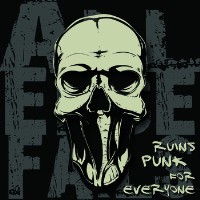 All Else Fails: Ruins Punk For Everyone

Metal punk group, All Else Fails is a four piece crew that hails from Toronto, Canada. Handing out their latest energy-filled album absolutely free, the band is making sure that their fans get only the best.

Ruins Punk for Everyone is a cover album that sees the band taking 9 of their favorite tracks and performing it their own way. This is the third release for the band, their first album, Against the Darkening Sky was released back in 2009. Their follow-up record, The Oracle , What Was, Is, and Could Have Been, came two years after. Both albums are available for purchase at BandCamp.

There are a bunch of recognizable tracks on here. One of the more prominent ones is Dig Up Her Bones, originally from punk rock band,Misfits. The boys do give it their best shot; performing a track that most punk rock lovers will recognize from the getgo. Apart from the deeper vocals, the rest of the cut still has that classic Misfits vibe.

There’s also the catchy, I Don’t Wanna Be Me, originally performed by another prominent band, Type O Negative.  This Brooklyn band gained a huge following and has released more than 7 studio albums. The final track is a bit of a surprise, it’s a cover of John Anderson’s Seminole Wind. Of course, the band adds their punk rock touch to the song; creating an upbeat number that much of the younger generation can appreciate.

Overall, this is a nice record to check out. Perfect for just blasting on while you enjoy your day.  It’s absolutely free too so go ahead and grab the download.