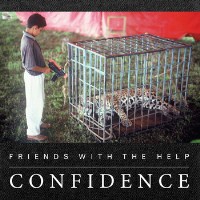 Friends With The Help: Confidence

Friends with the Help is a trio made up of Low Lux, Young Nige, and DJ K-Rec. Hailing from Toronto, Confidence is the group’s second release. Their first release was a mixtape with 17 tracks.

Ever since, they’ve honed their sound to create not only great beats or spinning awesome samples but to also include authentic lyrics as they share their stories.

Confidence is equipped with 13 tracks where the boys showcase more tricks up their sleeves. Their expert use of samples and vivid storytelling makes for an entertaining listen.

The first few tracks in the record already give listeners a great idea on how the boys spin tracks and inject their own personality into it. Chickens is a catchy single that features a laid back Cypress Hill touch combined with a little bit of  Chumbawamba. Second single, Helping, gets a little help from Jonie Mitchell. The track beautifully mixes Jonie’s voice along with a nice looping beat.

Mama brings in a new touch. The cut sees the trio bringing in a female’s voice as they rap with a more somber lyrical touch. It’s a heartfelt single that showcases a slightly different angle of the trio. Other tracks worth noting include Love Thought, title track Confidence as well as, Hollywood Lux.

In the end, Friends with the Help is a group that should be on your radar. It’s clear that the boys are proud to be from Vancouver and they certainly make the Canadian hip hop scene slighty more interesting. Take a listen to this and grab the download if you like it.