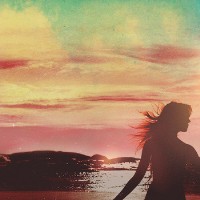 Cloudkicker: Let Yourself Be Huge

Let Yourself Be Huge is an instrumental compilation that’s filled with beautiful guitar picking and the occasional electro rock sound.

The guy manning all of these eclectic sounds is Ben Sharp, aka Cloudkicker. The Boston, Ohio native is no stranger to creating and releasing records. He’s had over 6 compilations released since 2008 and this latest effort only showcases how his sound has evolved from before.

Starting with the subtle acoustic driven single, Welcome Back; the song opens with a laid back feel. It’s as if you were sitting beside the ocean watching the sunrise; that quiet moment between tranquility and chaos, where there’s nothing but simple bliss. It’s followed by Explore, Be Curious; a mildly uptempo beat that unravels to melodic guitars and great composition.

On the other hand, Cloudkicker isn’t afraid to crank up the volume if he needs to. You and Yours is a great example of this. The cut is predominantly a rock opera minus the vocals and quickly reminds listeners of those prolonged solos rockstars often do on stage where it’s just nothing but their instruments communicating with the listeners. The epic EP is capped off with the title track, Let Yourself Be Huge, which is perhaps the most poppy single on the record. It combines pianos, a steady bass and a general uplifting mood.

Even though most of the tracks are quite simplistic, they do resonate with a subtle charm. None of the songs particularly stand out enough to keep it a part of your playlist for a long time, instead the record does a great job when it comes to filling in a temporary void. Providing a soundtrack to some of the fleeting but never forgotten moments in your waking consciousness.

Give this one a listen and grab the download. There are plenty of gorgeous layers just waiting to be explored from this compilation.  Plus, it’s absolutely free.