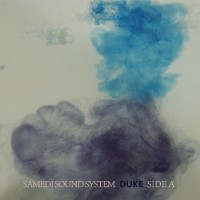 Samedi Sound System is an Aussie duo made up of Baron Oneway and Vir Asan. The two have been staples on the Aussie club scene, spinning tracks for frenetic club goers.

Duke Side A is the first record for the duo and it attempts to capture the energy they generate while pleasing gyrating and throbbing bodies in the dancefloor. The DJs spin anything from dancehall, dub to jungle music in their sets. Hence, it’s no surprise that this record echoes with various genres coalescing into each other and creating one coherent track after another.

Setting up the stage is, Get Aerty; a short 1-minute cut. After this, the boys get serious, so to speak and transform the mood of the EP into a party zone. Release the Hounds, Enter the Heroine, features fast paced yet steady beats with touches of industrial and electronica circling all over. It’s a great track for setting up the pace of the party.

The Battle for Europa, meanwhile, goes for a more electro-ambient vibe. It starts off slow and takes its time in evolving into a mesh of synths and electronic bits. Closing single, The Aerty Rises, brings the entire compilation full circle. With complicated mixes thrown in between, the song takes a nice flow without being overbearing.

Overall, the album is great for those who love to frequent clubs and dancefloors. You can expect great electronic dub sounds to come from the compilation. Moreover, it’s an awesome find especially for something offered for free. Take a listen.