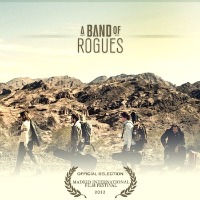 The summer heat has arrived and what better way to celebrate it than with chill folk melodies. Released May 2012, Stella StageCoach’s A Band of Rogues is a soundtrack compilation to the feature-length film which carries the same title.

Stella StageCoach was formed in 2009 by brothers Matthew and Tim Morgan. The band originally created pure instrumental music to be used for film making projects, but eventually lyrics were added. Their songs are usually inspired by daily living and travels abroad.

The 8-track set opens up with Everything You Say, a banjo-infused piece that’s perfect for that afternoon drive to the country. Perk up your senses as hand clapping beats, reminiscent of Matt and Kim‘s Daylight, play throughout the piece.

Home follows up with a reflective introduction transitioning to a charming piano and drum ensemble. I love how the track slowly escalates to a celebration of instruments, channeling a steady positive vibe.

An ambient piece, Suitcase Song features a plethora of keys and layered spacey vocals. Wrapping up the album is Juliett, a romantic and melancholic piano ensemble. Close your eyes and let soft cooing keys lull your ears.

In A Band of Rogues, Stella StageCoach offers two essential elements — quality and emotions. The pieces here were not not just created from nowhere, they were born from inspiration and experiences that reverberates with each line and note.