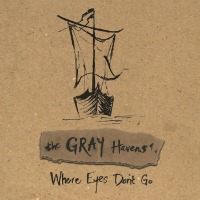 Dave grew up in a musical family and studied Music Education at the University of Illinois while his wife Licia, started to sing on stage and learn guitar lessons in 2010. The couple recorded their first album last June 2012 and since then continued to create music in their home studio.

Jumping atop playful piano keys is Where it Goes. Dave’s crisp vocals blend well with the soothing melodies. The great part of this song is how the arrangement is controlled and let-out in a smooth manner. The artists let each instrument shine and decay in their own pace, creating a celebratory ending that’s pleasurable to the ears.

A sweet acoustic piece, Gray Flowers tells a charming love story. The upbeat, sunshine-filled melodies is a perfect starter for those bright mornings. Train Station, on the other hand, offers a deeper note. Just like the previous song, I love how The Gray Havens try to encapsulate a solid narrative within a song—a feat that not all artists could deliver.

Closing the album in a positive note is Let’s Get Married. Close your eyes, press play, and let its catchy tunes and saccharine lines melt your heart.

In Where Eyes Don’t Go, The Gray Havens has combined narrative and music into a solid collection that’s worth every listen.