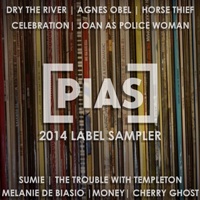 Enjoy some fresh tunes from independent recording label [PIAS], who shares with us alternative indie tracks from its line-up of artists such as Pixies, Basement Jaxx, Agnes Obel, Dry The River and oher artists that they have worked with in the past years.

Melanie De Biasio‘s The Flow follows with a lounge jazz approach. Listen as rich soulful vocals flow through your ears and create a calming sonic experience. The spaciousness and slow arrangement magnifies the sultriness of Melanie’s voice.

Clocking in at track number five is Fuel To Fire by Agnes Obel. This ambient piece exudes the perfect balance between ethereal angelic voice and dark undertones, letting each listener fly to psychedelic soundscapes upon every play.

The sampler closes with a heavier, more upbeat alt rock piece titled Six Months In A Cast by The Trouble With Templeton. The arrangement showcases influences of surf and pop rock mixed with earthly textured vocals.

All in all, the 2014 [PIAS] America Label Sampler encapsulates the label’s vision and taste, creating a cohesive theme even from ten tracks of varying genres and styles.