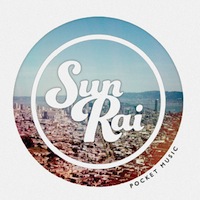 Brace yourself for some moving, jazz influenced pieces of harmonic music. Get ready for the ultra smooth beats of Sun Rai. Hailing from Australia, now based on Los Angeles, this phenomenal artist can play various instruments. The album is a package full of upbeat music coupled with 80’s disco classics.

Sun Rai is the singer of Thirsty Merc. Showcasing his outstanding talent, Pocket Music is his first proper release.

Treating the listeners with a suave experience, San Francisco Lights opens with images of swirling city lights, dancing into a state of euphoria. The vocals is very enthralling and compelling which makes this song even more addictive to listen to.

Rose! oozes a sound from the 80’s disco. This piece will make you think of going to the dance with extended jubilance and excitement. As the tempo escalates, the vocals rise as well.

Chiming notes and the piano tapping create and build the mood during Til the Lights Come On. Just the last track that this album needs, as this song will make you think of playing the album over and over again.