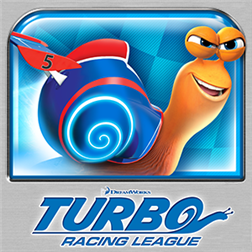 Turbo Racing League is an entertaining snail based racing game, and it’s bright and cheery. Published by Pikpok.com, all aspects of the game from the track to the environment are in bright colors, but the brightness isn’t just in the colors but the gameplay too. if you love arcade games, you’ll like Turbo Racing League.

Your character is a snail who is participating in the Taco shop races. There’s a bit of Micro Machines here, but rather than race through everyday items you’re going through a course. Just like in a real racing game, you have full control over your snail’s powerslides and steering, and there are several options that you can avail of. Tilt and touch controls are present and you can flip the controls if you want.

Turbo Racing League offers several challenges, with some requiring you to beat another snail towards the finish line, while others will have you finishing a specific number of timed laps. You will also find a slalom course here, and your objective will be to race through as many golden gates as you can. There is also a race mode where you start with limited fuel and have to pick up fuel cans to keep going.

Whenever you complete a race at Turbo Racing League you will get one or 3 stars. Once you get enough of them you can move on to more challenging races. While there are a lot of races here, they are not impossible to complete and gives you incentive to keep playing. In short, Turbo Racing League is a game for those who want to have some fun at the tracks.