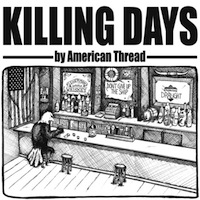 Creating gorgeous alt-country melodies with its own style and pace, Killing Days by American Thread is like a good old friend ready to pour you a drink.

Killing Days is the debut album of the Boston-based band. Released last March 2013, the four-piece band presents us with 11 alternative americana with a kick of rock. The album was recorded with multi-instrumentalist/producer Steve Mayone.

Drink For The Damned welcomes the ears with earthy, spunky vocals and fiddles of country guitar. The track encapsulates what the band has to offer, and sets the overall tone of the album.

Down-tempo electric guitars backed up with a steady percussion make up 12 Ounce of American Dreams. Press play and let the song’s emotional lines tells you a story of lost dreams.

Following with a rock americana approach is Fool’s Gold. This song uplifts the energy of the album as grungy riffs blend well with steady drum arrangement.

In Fisherman’s Lullabye, American Thread transitions from self-conscious worries to stories of real people. This poetic attempt gives depth and hearth to the song.

The band goes back to its own element with Time To Let Go. Press play and let stripped-down acoustic and sentimental musings close this album.

There is an overwhelming maturity and rawness in this album that makes the listeners vulnerable in every note. In its highest points, Killing Days is a well-thought debut album that really delivers.