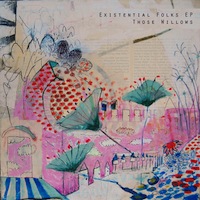 Those Willows has managed to retain a sense of purity, freshness, and bliss in the act of creating music. Existential Folks EP was recently released on October 2013. It consists of four marvelous songs. It is a heart-rending release and it demands repeated plays, evolving as cunning and bewitching.

Jack Wells and Mel Tarter, the vocally driven pair combined forces in 2007 to create a sound with their own creativity and brand. With lingering synchronizations and impressive tunes their high-energy performances incorporate indie, folk, jazz, pop and soul to entertain all kinds of audiences, ranging from the young to mature age.

Maps on the Table is a great and enriching song, especially with headphones, where the singer’s voice and creative lyrics along with the compassionate delivery unite, producing an effortless elegance.

Clouds Break proves that this EP is not only a promising album, but one that lives up to it and may even exceed its potential.

On the other hand, Mycelium is delivered with such warmth and cleverness that hesitations disappear, and the pleasure of hearing the singer do something very well takes over.

I Feel Younger is a subtle song that will put you on a good night sleep. Exactly the music that you need after an exhausting day.

The EP’s lyrics never cease to impress me—the way they take characters from their own lives and their own thoughts and reflect all these in the songs. What they do well here in this EP is to embody traditional music.