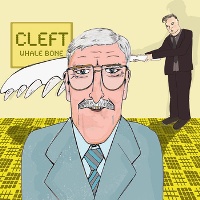 Try to imagine a fourteen minute song made by a drum machine and then try to compress it into a three minute soundtrack. That is what Cleft is. A 2-piece turbo-progressive band that makes massive instrumental music using guitars and some drums.

Dan and John met online and formed the rather radically sick band last November of 2011. They’ve also been featured in several radio stations such as the WRIR Radio’s British Breakfast in the USA and BBC 6 Music in the United Kingdom.

Whale Bone is their second EP, claiming to be recorded at rehearsal rooms in Manchester as well as in Dan’s kitchen using a collection of mismatched mediocre equipment.

Individually reviewing their songs would be a tedious task instead this will give an overview of what Cleft has to offer in their latest compilation. While Whale Bone is only five tracks long and lasts only around seventeen minutes, it is full of riffs, massive drums and heavy metal. As soon as the dramatic harmony of guitars and drum sets falls into place, it is difficult not to smile with admiration at the ferventness and unpredictability of the band’s songs.

Cleft refrains from the tried and tested approach of gradually going from quiet to loud but instead jumps right into the clashing of cymbals and wild guitar solos. Whale Bone did a great job in fusing two of the mostly used musical instruments which will surely propel the band to higher places.