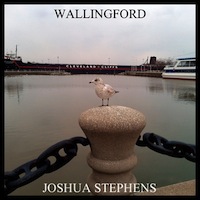 Joshua Stephens tend to write songs with a few common threads. Whether it’s an appreciation of his hometown or recalling childhood memories, the Cleveland, Ohio native has a habit of creating music that sounds like it’s a part of his flesh and soul.

Wallingford features ten tracks of threadbare indie folk. All penned by Stephens, the tracks here bank on simplicity and stripped-down arrangement that do not confuse or shroud the ears.

Something Good welcomes the ears with upbeat strumming blended with the artist’s crisp vocals. Following with a catchy, playful vibe is Grey, Run-down, and Cloudy. Listen as Stephens paints a stark image of his hometown in a witty manner.

Title track Wallingford treats the ears with intricate plucking that jumps and harmonizes with whimsical chimes. Closing up the album is You know I Love You, which infuses acoustic musings and percussion.

Though a bit short on flawlessness when it comes to production, Wallingford by Joshua Stephens shines on its simplicity and power to warm our hearts even in the coldest of days.

Track List:
1. Something Good
2. Grey, Run-down, and Cloudy
3. Sometimes, Sometimes
4. This Is the Middle of the Story
5. While We Still Have the Time
6. Jesus, Friend of Sinners
7. When We Were Fifteen
8. The Kids Will Be Alright, Eventually
9. Wallingford
10. You Know I Love You