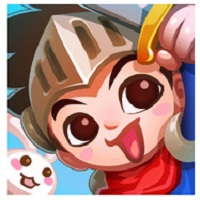 Adventure Town from Supersolid is a city building game that will test your creativity and skills. The game, which already has a million players, takes elements of the classic city building concept but added new features that make it more exciting such as some light fighting among others.

The idea behind Adventure Town is to build a city from the ground up and at the same time lure heroes and warriors to fight for you. While other city building games just focus on building and managing cities, that’s not the case here as you also have to send your heroes to special missions and defeat your enemies. In addition your heroes also have to go on quests around the land and venture into dangerous territories.

These quests vary in style and purpose, and the later ones are a bit challenging. However, before you can do any of that you must first build your city and you do this by putting up houses, shops and other structures to make your city unique. Once your complex has been established and your heroes are there, you can prepare to do battle with your enemies and the Big Bosses.

The gameplay is pretty easy to learn, and if you have played city building games before on mobile, the setup at Adventure Town will be familiar. However, the addition of quests makes this different and more rewarding. The game is fun to play, but what makes it even more so is the fact you can compare rewards with your friends, adding to the challenge.