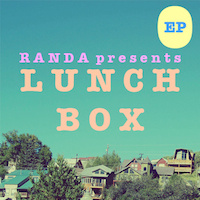 Are you in the mood for partying? If yes, then grab Lunch Box by Randa and be the house DJ for the night. This nine-track album offers laidback party tracks that will immediately put you in a cool  mood. Released in June 25, 2012, the album’s mixture of galaxy magic has attracted a hefty core following.

The first track, Apple Sauce, has an indie introduction. The electro tunes used in the song perfectly jibes with the rap vocals. The track features consistent  rhythm and stuck to its roots rather than going into another route, which is good for this kind of genre. It is not being predictable, but it has a steady pace that will hook you until the end.

For a groove-inducing high, Brave New Galaxy showcases playful rhythms that will excite you. This heart-pumping  piece goes well with the clean rap delivery. Unlike the previous track, Brave New Galaxy has textured, incosistent electro tunes, showing its prowess  in a variety of genre, such as electro pop, rap, and alternative music.

Do you want to go to Las Vegas? It seems the sunset there is one of the “must-see” in the place. But for now, let Randa’s Las Vegas Sunset visualize it for you. This track has no vocals, surprisingly, but it isn’t a bad one. It is quite risky for not utilizing any vocals, but it shows the ability of Randa to combine different electro musings with loud bass and soothing accompaniment.

Pterodactyl offers a new face of urban music. It is a song packed with signature monotonous rap vocals. But what makes this song special? The electro music for this song used one obvious genre, urban. This song is a treat for alternative music lovers and urban listeners as well.

So download, press play, and loose yourself in a head-bopping, dance-inducing escapade.