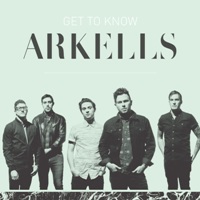 Arkells: Get To Know Arkells

Press play and get to know one of Canada’s most acclaimed and successful rock bands, Arkells, with a free sampler released via Noisetrade. The collection consists of two tracks from each of the band’s studio albums, a cover of Stevie Wonder’s Signed, Sealed, Delivered, and an acoustic version of 11:11 from High Noon.

Arkells is the brainchild of Nick Dika, Mike DeAngelis, Tim Oxford, Max Kerman, and Anthony Carone. They have toured with acts such as Metric, The Tragically Hip, Tokyo Police Club, British Sea Power, Anti-Flag, and The Black Crowes.

Come To Light opens the collection with a trifecta of electro funk beats, sharp riffs and rock undertones. The fresh and youthful vocals gives instant gratification not only for rock-alt fans, but for almost everyone who enjoys the pleasure principles of pop and funk.

In 11:11 , Arkells formulates a rock masculine calculation, where a cacophony of eccentric background instruments is flown elegantly into a sea of controlled rock beats, creating a steady yet playful foundation for a sharp and emotion-filled delivery.

Oh, The Boss is Coming! takes hard rock in its entirety with amplified guitars and robust vocals that vibrate and shake the whole room. While the band’s rock rendition of Stevie Wonder’s Signed, Sealed, Delivered gives a whole new twist from the song’s original jazz arrangement. With a mixture of rock and jazz instruments, Arkells has given justice to a well-loved track while at the same time putting their own distinct sound.

With lots of rock alternative bands surfacing in the music scene, it’s now harder and harder to be distinguished from the pack, but Arkells has managed to do just that by creating music that’s adventurous but still connects with the listeners’ sentiments. So press play, download, and let this sonic gem captivate your ears.