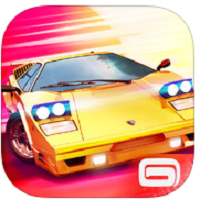 Asphalt Overdrive is a spinoff from Gameloft’s popular Asphalt racing games, and it looks great. Set in an 80s style California, the game has several original missions for you to play, or you can just go for a quick spin and enjoy the graphics, sound and the rush as you speed off.

Asphalt Overdrive is a large game, and playing it long enough you’ll be able to unlock several fully licensed cars like the Ferrari Testarossa and the Lamborghini Countach among others. Win enough races and you can also upgrade your car, and you’ll definitely need them later on as the game becomes quite challenging. However, it doesn’t get to the point that you’re frustrated with the way the game is going.

Asphalt Overdrive is great if you want to go for a quick spin around the city streets, but there are also other missions available. You can for instance, challenge the big bosses, try to escape cops, go through various obstacles and perform some serious stunts. The sheer variety in the game means there’s a lot of playability here not present in other racing games.

Aside from offering simple controls, the graphics are impressive, and there’s a genuinely 80s feel to the game. The particle effects and lighting are in real-time so they’re more visually stunning than before. If you’re not content playing against the enemy AI, you can always go on Facebook and challenge your friends. In other words, this is a very cool game and something you’ll enjoy as a racing fan.