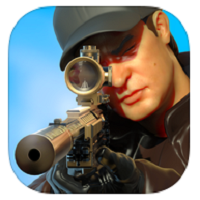 Sniper 3D Assassin from Fun Games for Free will have you playing the role of a super sniper, but unlike other similar games, this one is pretty easy to learn as you tilt and tap to shoot. Not only is the gameplay engaging, but the graphics are topnotch too.

Your missions will place you in different positions including street level and rooftops. To start each mission, you are given a picture of the target as well as some background information. Your goal is then to find the individual among the many people in the street.

Once you kill the target and finish the mission, you will receive coins that you can use to buy new weapons or upgrade your existing ones. If you kill the target with a headshot, you will be given more cash for upgrades. The mechanics of the game, not to mention the controls, are very simple so it’s a lot of fun.

To aim your gun, just tilt your device and shoot. This is actually very precise and it gives you a good opportunity to aim for the head. However, you cannot afford to miss the shot because while there is a reload, it will take four seconds by which time your target would have gone.

Sniper 3D Assassin also mixes things up so the game doesn’t get monotonous. For instance, some targets are in throngs of moving people, while others are involved in hostage situations or in a moving vehicle. If you kill someone other than the target, you fail, adding an extra challenge.