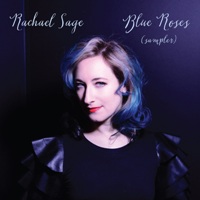 Pop singer/songwriter Rachael Sage from New York graces the FrostClick scene with a five-track free sampler available via Noisetrade. The collection showcases the multi-instrumentalist’s clever and sophisticated writing as well as her vocal prowess that will enthrall old and new fans.

First stop is Wax, a charming pop piece that utilizes classical cello strings and whimsical piano keys, creating a heart-warming arrangement that will inject heaps of positive vibes in every play. Rachael’s textured voice adds edge and sharpness to this lovely song.

In English Tea, Rachael grabs a handful of pop rock musings and pairs it perfectly with her earthy vocals. The guitar creates a catchy beat that makes you sway and bop your head.

Title track Blue Roses serenades the ears with a layer of soothing violin tunes and piano keys. Close your eyes and let passionate lines stir your soul. While Not Leaving You concludes the collection in a steady pop, guitar-influenced piece. This love song has the right amount of rhythm that’s perfect for slow dancing with your beloved.

Besides her songwriting talent, one of Rachael Sage‘s aces is her unique voice—a blend of texture and softness that can be flexible and shaped into a multitude of arrangements. So press play, download, and let this talented woman empower your heart and touch your core.