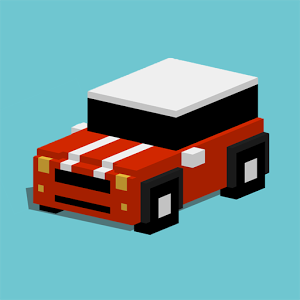 Smashy Road Wanted from Remco Kortenoever is a retro style racer with the pixelated graphics and style that will bring back memories of the good old video arcade. The game, set in an isometric view, isn’t exactly an adrenaline pumped game, but it’s not lacking in excitement either.

The game has a very simple premise, and that is you have to avoid the cops who are on your tail. Just race through the streets and try to keep the cops behind you, but it’s not going to be easy because as the game progresses you’ll see military jeeps and tanks going after you as well, and if you get past those there are SWAT members to take care of too.

The pixelated graphics of Smashy Road Wanted work well for the game, and each of the vehicles you control have it’s own unique quirks that make it unique from other games. The early levels are easy enough to complete, but there are a lot of secrets and options in each level so it pays to go over them thoroughly.

Unlike other racing games, the routes in Smashy Road Wanted are randomly generated, so each time you play it feels like a brand new game. And while there are a lot of forces after you, you’re not without power ups and boosters which are scattered throughout. And while you’re racing through the city, look out for the secret alleys that will triple your score. Bottom line: Smashy Road Wanted is a fun game, whether you’re into or not.