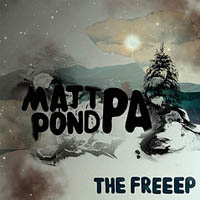 Matt Pond PA (commonly typeset as matt pond PA, or mppa for short) is an indie band formed in Philadelphia, Pennsylvania in 1998 by singer/songwriter Matt Pond. Throughout the years the band released 7 albums, 9 EPs and played with artists like Ted Leo and the Pharmacists, Youth Group, Nickel Creek and Mae.

So why making this album free?

“We took ourselves captive, and became our own producers, manufacturers, and distributors. It was a deferential revolt against inertia, a clearing of the throat to answer the quiet. Or maybe it was an inevitable reaction to seeing Pat Garrett and Billy the Kid.

In adherence to our own demands, these songs were recorded in a cabin in Bearsville, NY, as a simple sonic manifestation of our opinions concerning the arguable value of a waterlogged paperback.”

freeep
noun
1. a free EP designed to express gratitude.
2. emptiness generated to fill other emptiness.
3. an extremely anxious person.
verb
1. the inability to conform to socially accepted modes of interaction.
2. an open or free form of moving one’s body: there was something so awkward and beautiful in the way she would freeep.

You can find out more about the band from their website www.mattpondpa.com and from their Wikipedia entry or by simply sitting back and listening to their music: