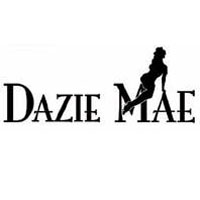 Dazie Mae is a band of four from France.

Why the name?
Nobody can deny that it’s a title of a very famous song by Johnny Lee Hooker. According to Dazie Mae though, with a different spelling, it is also the “femme fatale” hero from a comic strip by Li’l Abner from the forties and fifties. “And indication of how retro we are…” says the band on their Jamendo.com page.

Dazie Mae says they don’t really fall under one genre.

“Well that’s a hard one!”– they write. “Just about a mix of everything (folk, blues, jazz & bossa) At first that was mainly covers from anglo-saxon folk/rock from the 60/70. Then some original materials came along. In 2008, the band took a new turn towards “unexpected” arrangements of pop standards.

We are now actively working on new original materials, songs with a center theme, the imaginary life of DM.”

This compilation is of my favorites on Jamendo right now. It’s very chilled, purely enjoyable, and relaxing. The lyrics are funny, the sound is fresh and I just can’t stop listening to it (even though it is really not my genre).

Now something about the members:

Chant : Jeanne
After 5 years as leader of the famous « Flying Cheddars Lovers », a kind of « trash ballroom dancing band” specialized in covering Gregorian sacred songs, Jeanne has now decided to stop the booze!

Piano/Mélodica : Mathias
Mat’s childhood took place in a little African village in south Botswana , where he was initiated to sacred dancings and musical habits of Congalaabawanaa. He’s never been quite the same ever since.

Guitare : Tom
Tom met one day Pat Metheny after a gig in Nancy (east of France). He immediately kicked the guy’s face to steal his guitar. In fact he never leaves it alone, even taking it under the shower, which [could] explain the weird sounds…

Basse : Serge
After being expelled from England for setting fire to a pub where some band were playing live using a “dreaded” drum machine, he writes his first album with around 54 post punk songs, all written in 4 days.