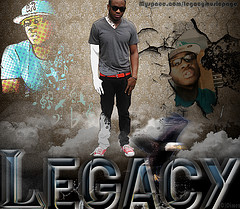 We have a star on the rise for you here! Danny “Legacy” Mcbride is a very talented New York artist with a broad musical range. His sound is a fusion of R&B, Pop, Jazz, sometimes even Gospel & Rock. He’s been producing local artists since he was twelve years old, taught himself how to play piano at five and sang ever since he could speak. He has written or co-written all of the songs on this self-titled album and then spent countless hours of recording and producing to bring it to perfection. Some of the songs on Legacy’s album feature two of his good friends and studio partners: Critical, who is both a lyricist and a rapper, and G-dub, who is also a producer.

UPDATE: Legacy’s song “I wanna be your everything” was included on FrostWire FrostClick 2009 Compilation Album Volume 1 celebrating the first 1,000,000 downloads of 2009.

With his great ear for music, soft tenor voice and amazing producing skills, this 21-year old has all he needs to make it big! He’s already producing songs and selling beats to up and coming artists and just recently he has formed a pop/rock/alternative band named “Jerico Kane” with two friends from U.K.

We’ve asked Legacy some questions about his creative process, influences and the music industry. Here are some excerpts:

FC: What’s your songwriting process?
Legacy: My song writing process starts by me making a beat that was inspired by a situation or a sound, and then coming up with the melodies to the beat. I usually hum the melodies with random words, until the words start to write themselves. I may get one of my friends (Reggie “Critical” Brown or Glenn “G–Dub” Williams) to help me with the wording because it usually makes it easier for me, as I’ve made the beat, came up with the melodies, arranged the song and produced it.

FC: What are your musical and non-musical influences?

Legacy: My musical and non-musical influences vary. Non-musical things that influence me are the dark and light of life, my desire to become something great and my family. I have way too many musical influences to name. I listen to anything and everything that sounds good to me – from R&B, Pop, Gospel, Rock, Electronica, Electro, Experimental etc. People like Michael Jackson and Prince seem to be everyone’s influences growing up (and Michael was mine too), but I grew up also admiring artist and musicians such as Miles Davis, Stevie Wonder, James Hall (who is a talented gospel musician), Kenny G and many other talented jazz artists. I would also like to name a few producers that I’ve always admired and I’m still influenced by: Timbaland, Pharell Williams, Chad Hugo, Rodney “Darkchild” Jerkins, Quincy Jones and Kanye West.

FC: What type of recording process did you use?
Legacy: I honestly usually record and produce myself, as crazy as it sounds. I usually like to record the chorus first, because its the most prominent part of a song, then I’ll record the verses and bridge and etc. I run in and out of the recording booth pressing the record, stop, and start button, simultaneously mixing and arranging the song as I go along.

FC: What are you thoughts on Creative Commons licensing?
Legacy: CC licensing is a great resource as it allows the artist to give the freedom and rights to let others know what you allow them to do with your songs. Its a creation of stability and freedom for up and coming musicians and artist.

FC: What’s your outlook on the record industry today?
Legacy: My outlook on the record industry today… There is a pool of artist, mainly in R&B and Hip-Hop, that are using the same formulas to make hits. I don’t believe people are making music that they want to be making anymore. I think many artist have become afraid to take risks and propose new and innovative music.

Legacy has always expressed the desire for his music to be heard all around the world and he wants you to share the album with as many friends as you can – download, burn it, pass it on! He’s even licensed Legacy under Creative Commons Attribution-No Derivatives license so there is no question whether or not you can freely (and legally!) distribute it, use it as background music in your student movie or even play on commercial radio stations – just mention his name, that’s it – its all free.

Legacy is craving your feedback, so please don’t hesitate to leave us a comment below and let us know what you think!

Software used to produce this record
Legacy told us he uses Sonar 7.0 and FL Studio for the drum patterns. To record he uses Nuendo 3.