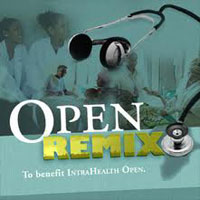 Some time ago Intrahealth International released a special remix in honor of World Malaria Day. The project was put together by rapper Mopreme Shakur, brother of the late Tupac, and soon included ten tracks all being a remix of Youssou N’Dour’s song “Wake up – It’s Africa Calling”. The purpose of the project was to address the most critical health issues in Africa by bringing greater awareness of and support for open source training/development for health workers across the continent.

In 2004 the Rolling Stone magazine described Youssou N’Dour, singer, songwriter, and composer, as “the most famous singer alive” in Senegal and much of Africa. His music, a mix of traditional Senegalese mbalax with eclectic influences ranging from Cuban salsa to hip hop, jazz, and soul has won him an international fan base of millions and some great collaborative projects with musicians as Peter Gabriel, Sting, Wyclef Jean, Bruce Springsteen, Tracy Chapman, Branford Marsalis and many others. In 2009, N’Dour released his new song “Wake up (It’s Africa Calling)” under the Creative Commons License in order to help IntraHealth International in their upcoming campaign.
The song, remixed by artists such as Nas, Peter Buck of R.E.M, and Duncan Sheik, was soon released as a free download across all major distribution partners.

Although the remix was made available for download nearly 2 years ago it wasn’t until today that I stumbled upon it on the internet for the first time. So for all of you that still didn’t get a chance to download some of the tracks, here it is – a great sound and a great example of just how much open source can change the world.

Change the Way People Think about Health, Technology and the Developing World. IntraHealth OPEN is an initiative aimed at building technological fluency and local innovation in open source systems for health in Africa. With growing broadband connectivity and mobile phone use increasing at twice the global rate, Africa is taking advantage of cutting edge technologies in eHealth. Open source technology (where the code is openly available and able to be modified or expanded by the local developer/user) is ideally suited for application in low-resource environments, being free of licensing and upgrade fees, versatile and collaboration-friendly. With targeted training and support, open source solutions can enable African developers and health professionals to create, customize and grow systems themselves based on local expertise, needs and realities.