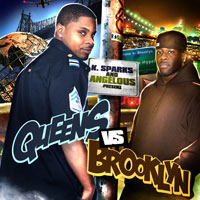 K. Sparks is a New York based rap artist, music producer and lyricist all in one. He has been on our radar for a while now. Back in January 2009 we’ve promoted his album “Definition” on FrostWire. In just a few days, he received over 25,000 download and got a great response from hip-hop fans. Today K. Sparks released his newest project with Angelous entitled “Queens vs. Brooklyn” and once again he is giving it away as a free download licensed under Creative Commons.


K.Sparks Bio
K. Sparks always been involved with music. As a child, he used to listen to his father’s jazz band rehearsing in their apartment. Writing became K. Sparks’ focus during his teenage years: “I would write lyrics in my classes… by the end of the day I would have about 5 songs” says K. Sparks. Born and raised in Queens, NY, he quickly learned the value of hard work, dedication and determination and actively started building his career.

The Free Album
“Queens vs Brooklyn” is a joint project of K. Sparks (Queens) and Angelous (Brooklyn). The album contains 21 tracks that are meant to be listened to in chronological order as they take the listener on a journey from start to finish. K. Sparks and Angelous have collaborated with many other artists in this album – Julius Francis and Tina Quallo are just some of them. Production artists include: Kurser, T-Mos, Big Drew, Pajozo, and others.