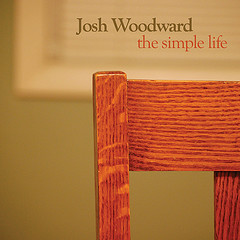 We loved this record, the first time we heard Heritage Place we were singing along the chorus, it got us in a very happy mood here at FrostClick.
Josh Woodward is a livewire acoustic rock musician from Ohio. Taking the musical road less traveled, he’s chosen to freely offer his entire collection of over 100 songs on his website. Without pressure to write music that sells, he writes energetic and passionate songs featuring vivid stories and dark humor.

Josh Woodward is a singer-songwriter based in Findlay, Ohio. What distinguishes him from most other musicians, is his choice to release all his music (including unreleased demos and rejected songs) for free under a Creative Commons-licence, though it is possible to purchase physical copies of his CDs, released by Snooter Records.

Many of Woodward’s songs were written in response to challenges from Song Fight!. Each of his albums contains at least one song first released on Song Fight!, although this is not widely mentioned on Woodward’s website or in the album cover text. His songs have won more than half of the titles he competed in, giving him one of the highest winning percentages on that website.

In addition to releasing his music online, Woodward is also an experienced performer, and can often be found giving concerts at Coffee Amici in Findlay. His music is mostly original, but has been known to play covers of other people’s music during live performances. A lot of his lyrics are very central to Findlay; singing about people and locations in the small town. Josh has so far released 7 albums.

Stay Tuned for more Josh Woodward material, please download it and place it on your shared FrostWire folder for everyone to spread the word about Josh Woodward.