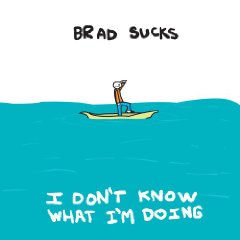 Brad Sucks – Meet Brad Sucks, the self-proclaimed “one man band with no fans”. Brad’s brand of ironic rock has spread like wildfire via the Internet in the last several years. His “fan funded, professionally manufactured” album “I don’t know what I’m doing” was presold though his own website, allowing fans to kick in the money needed to press and print CDs at a professional level.

“I Don’t Know What I’m Doing was originally released in 2003. One of the first albums to encourage file-sharing, it’s spawned hundreds of remixes, wound up in new cars and on MTV and done pretty OK for itself despite being available for free.”
– Brad Sucks