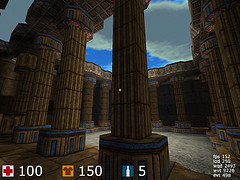 This is an oldy-but-goodie computer game. Cube was first released in singleplayer mode in January 2002 and had multiple updates all the way up to 2005. The game and its engine (which also called Cube) were developed by Wouter van Oortmerssen, a Dutch computer programmer. The game was always very well reviewed and it even received an award for “Best Free 3D Action Game” in 2003. It runs on almost all operating systems (Windows, Mac, Linux), it features both singleplayer and multiplayer gameplay and even has a build-in level editor.

The Cube engine was designed as an outdoor engine, i.e. it’s designed for maps that are outdoors rather than Doom and Quake, which are optimized for indoors. It utilizes a pseudo-3D world model similar to the Doom engine, based on a 2D height map. This imposes some limitations (e.g. no rooms above rooms), but does permit slopes and 3D props which in turn can be used to make up for most limitations, for example to create bridges with a passage below.
The engine is based on zero-precompilation philosophy – all map data is interpreted dynamically, with no need to recalculate such as shadowmaps or BSP data. This makes realtime in-game map editing feasible. Cube supports multi-user, realtime map editing.
The engine is compact and relies on simplicity and brute force instead of fine-tuned complexity.

If you like this game, you might want to take a look at Sauerbraten (a.k.a. Cube 2). Yes! – it is also a free multiplayer/singleplayer first person shooter, but includes major redesign of the Cube FPS. It was originally released in 2004, but its newest version, Sauerbraten CTF Edition saw the light of day mid 2008.

The Cube also exists as a free iPhone/iPod touch game, but you better just download it from iTunes.