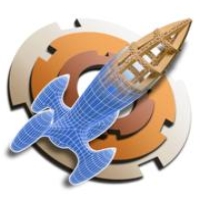 So you just made a cool 3D model, but wouldn’t it be great if you could turn that into a real object you can hold? Well, 123D Make by Autodesk allows exactly that.

How does it do that? It turns a 3D object into cardboard templates. After printing these templates, you can use these to cut cardboards or foams. Glue them together, paint and your virtual 3D object is literally in your hands. The program is a bit different from other 3D graphics software, but it will only take a while to get used to the interface.

You can upload 3D objects or grab one from the many objects on 123D Make’s gallery. After you import an object, you can turn the model into a skeleton or slices. All it takes is a button click. The screen is divided into three panels. The model is in the middle window.

On the right are the cutout pieces; their appearance varies. At the left side are buttons for importing, construction techniques and object size. You can fine tune the slice distribution and curves. At the bottom of the panel are buttons for Modify Form, Slice Direction, Get Plans and Assembly Steps. Note that the program works with the OBJ format, which is almost universally recognized.

When you’re satisfied with the cutouts, you can print the templates. 123D Make works well on its own. But you can use it with the other 123D apps like Sculpt and Catch. It is also compatible with other 3D programs including Blender. You can use these to create objects and import into Make.