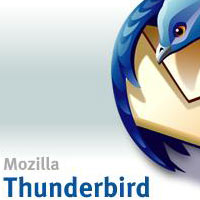 Mozilla Thunderbird – a high-quality free email application for everyone

Mozilla Foundation is a global community project providing open and innovative internet products. Mozilla Thunderbird is probably one of the best and most popular email management applications that does not come build into your computer at purchase. It’s constantly being developed by the Mozilla (the same people that brought you Firefox) and it just so happens that it is free, open source, cross platform & multilanguage.
The new Thunderbird 3 features impressive search system and support for tabs in the UI.

Here is some more information about the features available in the Thunderbird from Wikipedia:

Junk filtering
Thunderbird incorporates a Bayesian spam filter, a whitelist based on the included address book, and can also understand classifications by server-based filters such as SpamAssassin.

Extensions
Extensions allow the addition of features through the installation of XPInstall modules (known as “XPI” or “zippy” installation). One example is Lightning, the calendar extension mentioned above.

Extensions and themes (below) available on the Mozilla Update site may be upgraded through the client.

Themes
Thunderbird supports a variety of themes for changing its overall look and feel. These packages of CSS and image files can be downloaded from Mozilla Add-ons.

Windows-1252 character encoding
Web pages and e-mails encoded with Windows-1252 are often displayed incorrectly if the web-page or e-mail does not correctly indicate the code-page in its headers. The code page can be specified for individual web-pages or e-mails by selecting “View –> Character Encoding –> Western (Windows-1252)” from the menu of Mozilla Thunderbird. This problem originates from a decision by the Mozilla developers to conform to broad standards in this case and ignore the influence Microsoft standards have had on many actual web pages.

This problem is often apparent when a large number of this symbol is present in a web-page: ?. However, these symbols don’t always disappear with the solution presented here, as it could be caused by any kind of character encoding mismatch. Encoding mismatches for Windows-1252 are by far the most common for English language web-pages, though.

The source code is freely available and can be compiled and run on a variety of other architectures and operating systems.

Internationalization and localization
With contributors all over the world, the client is translated into at least 36 languages.

Security
Thunderbird provides enterprise and government-grade security features such as SSL/TLS connections to IMAP and SMTP servers. It also offers native support for S/MIME secure email (digital signing and message encryption using certificates). Any of these security features can take advantage of smartcards with the installation of additional extensions.
Other security features can be added through extensions. For instance, Enigmail offers PGP signing, encryption, and decryption.
Optional security protections also include disabling loading of remote images within messages, enabling only specific media types (sanitizer), and disabling JavaScript.