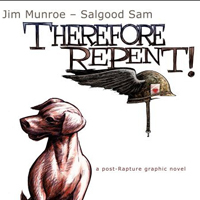 “Therefore Repent!” is a best-selling graphic novel written by Jim Munroe and illustrated by Salgood Sam. It tells of a world post-Rapture, when the righteous have all gone to Heaven as predicted by the Christian Bible. All that’s left is a society split between those who believe that they will also eventually ascend to heaven if they do enough good deeds (Splitters) and those who think that a Christian-less society is as good as any. The world slowly spirals into madness as dogs talk, machine gun-toting angels murder the sinful, and humans gain magical powers and forms.

According to Jim Munroe:

Therefore Repent! is my take on the dark fantasy world established in the Holy Bible’s Book of Revelations…mine’s closer to Bible slashfic, what with the bisexual angels and nipple-clamp-enhanced demonic communion. I like to think I’m re-imagining the Bible franchise, like Frank Miller did for Batman.

The illustrations by Salgood Sam are top-notch with intense attention to detail. The story by anarchist freelance writer Munroe is fascinatingly unique, with characters that don’t end up feeling stale and stereotypical. The insane post-Rapture world (if it were to happen) feels dark, foreboding, and real.

Some readers may find “Therefore Repent!” a little hard to follow. It’s because there are prequels to the story, “An Opening Act of Unspeakable Evil” (which started from a fake blog) and “The Bold Explorers” with Michel Lacombe. You can access both from here.

Indeed, “Therefore Repent!” is one of those things that are too good to be true. It’s an awesome graphic novel that has achieved critical and commercial success, yet, it can be read for free! It’s good enough to make you want to buy a copy.