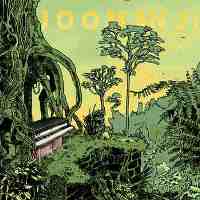 Take the chill pill as Manj by Joomanji take you in a laid-back journey of hiphop and solid beats. Created for over two years, the album showcases an artist’s revolution and shifting pallets throughout the years.

Laced with sounds of trumpets that are mixed with samples of birds chirping on the background, Somethin’ Out Of Nothin sets the right amount of chill vibes to relax your soul.

In Spread Too Thin, subtle trumpets and beats slowly blooms and sets in the ears. Lindsay Olsen‘s airy and soothing vocals fluidly envelopes the listeners in a trance, where soul musings, beats, and samba influences play in perfect harmony.

Where Are You (Love For JL) also features the serene voice of Lindsay Olsen. This time, her vintage-sounding vocals are laced with jazz infusions and steady drum beats that are perfect for a laidback evening.

Teeming with 13 tracks, Manj by Joomanji is an album that plays with the beauty of subtlety and rhythm. Whether you’re daydreaming or just relaxing, listening to this album is a great way to recondition your body and mind.