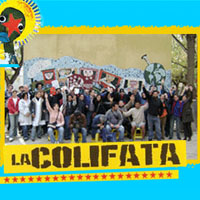 Manu Chao is no stranger to pushing the limits of music and it’s conventions. In fact it would be rare to find any of his music settled in a clearly defined genre.

Manu Chao is usually found expanding musical concepts; from its inception passing through the way it’s recorded, until it reaches a finished state that isn’t always a stable one.

However, with all this said, “Viva La Califata” will stand on its own as one of his most interesting and expressing works of music. Recorded in conjunction with Buenos Aires’ notorious radio station, Radio La Colifata which is notorious by being staffed by current and ex-patients of a psychiatric hospital in the area.

That should give you a sense of what you’re getting into with this album. A sense that may or may not be completely wrong. If your brain told you it expected some psychedelic gabbercore like hrvatski or kid606 (both great artists if you like to experiment and have your mind blown at the same time, in the good and bad way), it is my pleasure to tell you that you’re completely neither wrong nor right.

There is certainly no techno or electronica in this piece as we know it, but you can certainly get the feeling of unbound freedom of expression in this piece as you would in some of the most notorious and genre defining gabbercore songs. By this point, you’re probably wondering if the author of this post is himself a current or ex-patient of the psychiatric hospital this piece of music came from. I assure you I am nowhere near Buenos Aires.

What you will find in this album is 30 of the most interesting minutes of free flowing musical creativity. A very lyrically heavy piece that relies on spoken language to deliver its sharp message. This is certain to alienate any non-spanish speaking listeners but, granted you speak the language, will take you on a trip through the minds of these patients and ex-patients.

Imagine having a brain upside down and emptied of its contents, contents which are then mixed around, some duplicated, others cut, and most stacked on top of each other, to then all be presented in rapid succession stumbling on the way. This is the only way in which I can fathom describing the music contained in this album. The messages in this pool of thoughts range from insightful critics of the psychiatric system, to observations of the world passing throughout the state of the world and their feelings about love.

This is all I can say about the music itself, but I hope that I managed to transmit at least a small piece of the powerfulness of the emotions this album evokes.

If you enjoyed this album like I did, please head over to the donation section and make a donation to keep this station going.