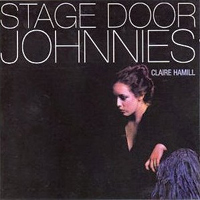 Claire Hamill is a British singer/songwriter that has been composing and recording since the 70s. She has a slew of albums over the decades and most of them can be downloaded with her blessing from her website. If you have heard of this talented musician, it is probably due to the fact that she wrote “You Take My Breath Away”, a song that became a hit for Eva Cassidy. Hamill has a soft voice in which personal intimacy wins out over power.

She has been compared to Joni Mitchell but I hear a tantalizing mix of folk and traditional chanteuses like Judy Collins and Sandy Denny. She is a consummate storyteller in her lyrics. Nine albums are available on her download page and they all have high quality original songs and covers that are worth listening to.

Her first album was One House Left Standing (1971). The first track “Baseball Blues is a raggy affair but most of the songs are steeped in the English folk tradition. I especially like “Urge For Going” which shows that Sandy Denny influence.

The sophomore album October (1973) isn’t all that distinctive. However her third album titled Stage Door Johnnies (1975) is my favorite of her albums. This is the album that includes “You Take My Breath Away” but all the tracks are quite strong. “All The Cakes She Baked Him” is quite Joni Mitchell-like. “Geronimo Cadillac” proved that Hamill can excel on an upbeat song. There are also some nice covers of The Animals’ “We Gotta Get Out of This Place” and The Moody Blues’ “Go Now”.

Abracadabra (1975), Touchpaper (1984), and Voices (1984), and Love in The Afternoon (1988) are all good solid performances. However the later albums loses that mellow folk influence and tend toward over-produced pop. I would especially recommend her cover of The Kinks’ “Celluloid Heroes” on Abracadabra. I believe most of these albums were originally released on Ray Davies’ Konk record label.

Summer (1998) and The Lost and The Lovers (2006) are collaborations with Andrew Warren. They are essentially conceptual albums with more hyper-produced studio tricks. The songs are quite catchy, some even gorgeous, but I prefer the earlier efforts.

All albums are available in 128kbps MP3. If you enjoy the music, support the artist by leaving a donation through Paypal or by buying her CDs.

You can download all eight albums from Claire Hamill’s website. All albums are free for personal use.