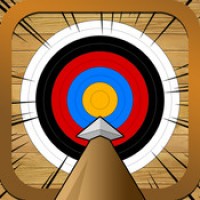 Time for some archery on the iOS platform with Archer World Cup. In this highly rated game, players need to master the game of accuracy and enjoy the smooth play the same time. Rated as the Top free app in various countries, it is time to compete with the World.

In-game, the obstacles you are most likely to stumble upon are the wind and your heartbeat. Yes, so even if the angle is great and accurate, your heartbeat may just cost you your aim and make it go for a royal toss. Created by LitQoo, the developers have churned up a very neat offering for iOS gamers and will surely make you smile with this one.

In Online mode, players can compete with other players from around the globe. The game is great with smooth visuals and an intuitive gameplay. Making it a perfect recipe for the casual game fan. Overall, it is a great game with a neat UI, an easy-to-play mechanism and its own dash of competitiveness. The newer update features a host of improvements over the previous version, which makes the gameplay much smoother and responsive than before.