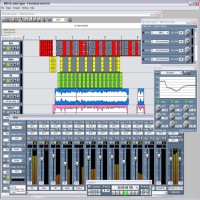 Kristal Audio Engine is an audio recording/editing software that’s perfect for anybody who’s interested in getting acquainted with music and sound editing. The program is absolutely free for non-commercial, educational and personal use only.

The audio engine provides tons of cool features and provides a user-friendly interface.

Anybody who wants to get a first hand feel of the recording, mixing and audio sequencing process can turn to freeware programs like Kristal and Audacity to help them out. Kristal is an easy to use software that provides options like: ASIO low latency audio driver support, 3 VST master effect slots, 3-band parametric EQ &, 32 Bit floating point audio engine, Supported file formats: WAVE, AIFF, FLAC, OGG Vorbis, and 16 audio tracks, to name a few. It also contains four plugins.

The program has been dubbed as a bare bones version of most commercial recording/mixing softwares and it’s the perfect tag. There are no bells and whistles on this one, just simple and straightforward tools for almost everything you need. It’s perfect if you want to just focus on the music and work rather than getting caught up in pressing all the other buttons to add cool effects etc.

Of course, this software may just be a little too simple for those looking for more features, but as mentioned, it is the perfect one for those who want a one track mindset. Just press record, work on it and then it’s done!