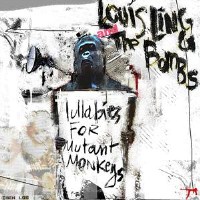 Louis Lingg and the Bombs: Long live the anarchist revolutionairies!

Long Live the Anarchist Revolutionairies! is the band’s first full feature album. It compiles 27 upbeat, rockin’ tracks that time warps listeners back into the height of punk rock music. The album is a fun way to spend a great Saturday evening, partying with friends.

The band is currently based in Paris where, according to one description, “they regularly blow up little bars with explosions of snot and beer fuelled punk rock energy!” Now, for a little history lesson for non-anarchists, the band actually named themselves after Louis Lingg. Ling was a famous anarchist who exemplified utmost defiance by committing suicide in his jail cell after he was arrested in connection to the Haymarket Square Bombing in Chicago.

Listening to the band definitely brings a whole barrage of power punk pop energy down your ears. Almost all of their tracks contain powerful, catchy hooks topped off with witty even funny lyrics. Although the central theme seems to be revolution and going against anything mainstream, the band wraps it up in nice little packages that make the songs interesting to the listeners. Princess Mononoke, for example, is a throw off to Japanese cartoons and anything Japanese, even namedropping great director, Akira Kurosawa.

Another favorite is a song titled after Lingg himself. The vocal work for the tracks are a mix of shouty melodic vocals, often all three vocalist join in unison, chanting the chorus.

With every track, the energy from the group’s performance is hard to miss. With constant computer crashes, buggy/pirated equipment and no budget for recording, it’s hard to believe that they managed to pull off such a string of raw awesome tracks. It is definitely a true gem for punk rock fans, that is, 70s style, true punk rock.