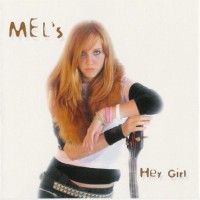 Young French pop artist that makes you think “pop” is okay again. Even though she might not be the next pop princess, Mel’s Hey Girl is a pretty charming album. Coming from such a young singer, the tracks on this mini-album is catchy and fun to listen to.

For a first release, Hey Girl is a solid compilation of 5 beautiful melodic pop rock tracks that you can play in your Ipod on a laid-back day. Mel’s albums, including her latest, Take Advantage, are released under a creative commons license.

Starting at the tender age of 15, Mel’s was already singing and writing tracks. She studied under the Conservatory of Saint Raphael and was under the tutelage of her father who was a professor in theater at the same conservatory. Aside from creating pop rock albums, Mel’s currently an accomplished opera signer. Basically, she can sing any number of opera, pop, Armenian, gospel etc., proving that this girl definitely has more than just a pretty face to show for.

Hey Girl is probably the poppiest track out of the entire album. If girl pop just isn’t for you, then stick around and listen to the other tracks like Un Sentier, which is a beautiful melodic pop rock ballad that showcases Mel’s powerful vocals. The rest of the other songs aside from the title track features more instruments and has more depth.

Her pop rock style plus her vocal range is perhaps Mel’s greatest asset. She can switch from a soft ballad to a hard pop rock princess sound, much like a French version of Kelly Clarkson.

This work is licensed under a Creative Commons Attribution-NonCommercial-ShareAlike 2.5 Generic License.